…Got a Puzzle Trail book…

I still have this:

It was published in 1984, so was already two years old by the time it came into my possession (either bought for me, or at my request).

I always enjoyed Puzzle Trail. I would have been four when the first series was shown, yet I must have seen some repeats for I remember the hosts of the second series (from 1981) Tommy Boyd and Sally Grace fairly well.

I also remember not being convinced by Davy Jones (“of The Monkees fame” as the book puts it) who helmed the 1984 series. He didn’t know how to do funny voices.

The book uses each of the series as the basis for a sequence of puzzles and riddles, and also throws in a few one-page quizzers for luck. “Some of them are dead easy,” writes Clive Doig in the introduction, “the others are excruciatingly difficult”. I didn’t seem to have much trouble with this one: 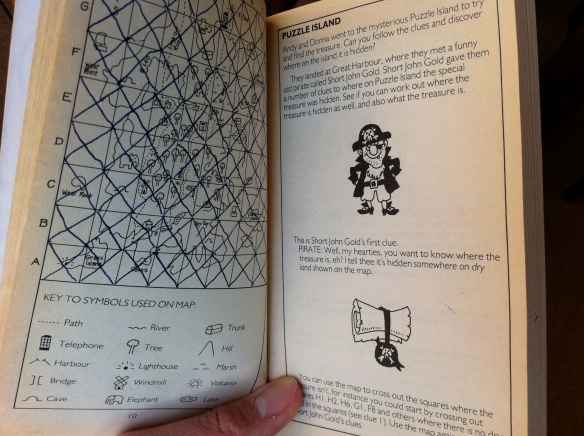 …though on closer glance it appears I have crossed out every single square. Oops. Either I lost patience or got angry. I don’t know why; I could easily have cheated, as all the answers are listed in the back.

Thinking back, geographical-based quizzing of a more elaborate kind must also have been gaining my attention at this time, in the shape of Treasure Hunt. I was certainly watching it in 1985, when I recorded the theme tune off the television and on to cassette. More of which anon…