I started taping theme tunes off the television in early 1985.

I would go to compile three volumes of cassettes, spanning the years 1985-87 and a total of 94 programmes.

I’ve still got all three tapes. Here’s the first volume, on to which I put the two themes I recorded this day 25 years ago: 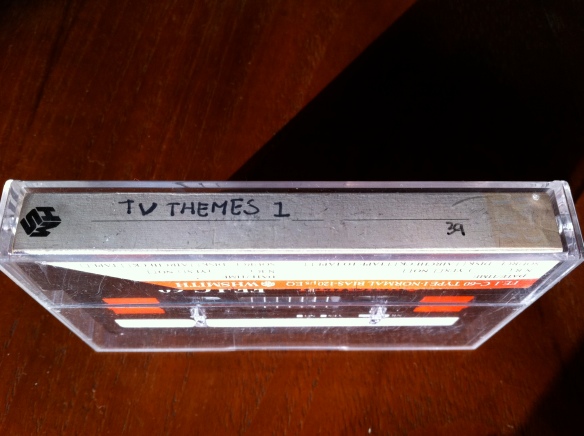 I’m not sure what prompted me to start. Perhaps I heard somebody talking about it at school. Perhaps the family had just invested in a portable tape recorder (this is more likely). Either way, I loved doing it and always loved listening to the end result.

Side one track one of this first volume is the BBC children’s comedy drama Who Sir? Me Sir?, which I’m sure is barely remembered by even those who appeared in the cast.

But then it gets interesting, in the shape of Treasure Hunt (still one of the greatest TV themes ever) and Fireball XL5, which I probably captured during the school holidays when the series was being flung out disinterestedly by Central.

Here’s the reverse of the inlay card (the ink on the other side has faded to near-invisibility):

I’m listening to this tape as I type, and I’m struck not just by how great most of the themes are, but also by how well the cassette has weathered the decades. The sound quality is pretty good – damn good, actually.

I think I had fairly decent taste back then. I wouldn’t turn my nose up at many of those shows today, save perhaps Brat Farrar and (on the other side of the tape) Zorro and Son. “Soppy Music” sounds today like something that must have accompanied a testcard or Pages From Ceefax. Adam Heath is a misspelling/mishearing of Adam Faith, which I must taped off the radio to fill up the end of the side (ditto A-Ha).

As you can see, I didn’t discriminate. Flagships shows and humdrum efforts alike were recorded. Elsewhere Stilgoe’s On is next to Duty Free, and Bergerac is sequenced after Food and Drink.

The fact these tapes still exist at all is as much to do with my own archival instincts as the longevity of WHSmith-branded cassettes. Whatever went in to the manufacture of these pocket money treats has weathered the passing of time with hat-doffing aplomb.