..Today the Conservative party conference started in Eastbourne.
Mrs Thatcher sprained her ankle.
A new paper came out today.
It’s called The Independent. It’s a bit like the Times…

I remember being puzzled as to why it launched on a Tuesday. Surely Monday would have made more sense?

My parents were very sniffy about the Independent. My dad bought a copy of the first edition and didn’t think much of it. It was a good 15 years before he bought another.

I, however, was fascinated, as much by the novelty of a “new” daily paper as its contents.

So much so that it was a good 20 years before I bought another. 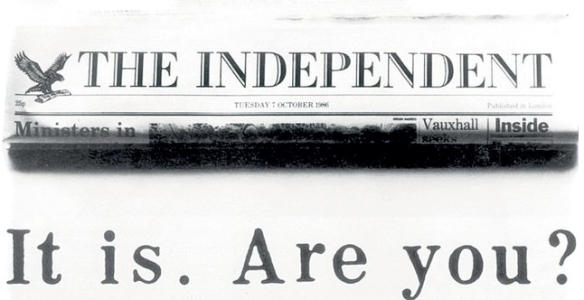 The people who came up with that slogan, Saatchi and Saatchi, were also responsible for packaging and promoting this year’s Tory conference, which wasn’t in Eastbourne, but in Bournemouth.

It doesn’t seem to have been a particularly memorable gathering, ankle-injuries aside. Norman Tebbit organised the whole event and claimed all the credit for its opinion poll-inflating success, much to the chagrin of his deputy Jeffrey Archer. This didn’t stop Archer lapping up the limelight…

…a picture that was much reproduced three weeks later when Archer had to stand down after reports that he had ALLEGEDLY paid a prostitute to go abroad to avoid being quizzed by journalists, thereby sowing the seeds of a story for Ian Hislop to dine out on for the ensuing 25 years (and counting).

I love how everyone, including Maggie, is wearing their conference passes in that photograph, just in case there was the potential for confusion over who she might be.