Macmillan was one of those people who always looked old. Even when he was prime minister back in the 1950s he had the appearance of an octagenarian, albeit a somewhat sprightly one.

Here’s the old bugalugs in 1956, flashing a £1 Premium Savings Bond: 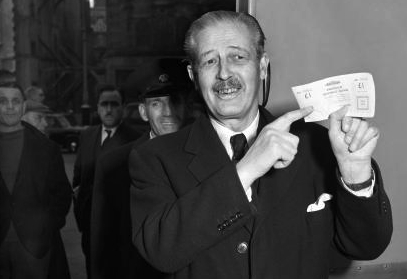 His death was quite a big deal at the time. He’d become a bit of a one-man anti-Thatcher movement in the House of Lords, likening her fondness for privatisation to selling off the family silver. But as with the similarly-themed verbal eruptions from Ted Heath, I don’t think Thatcher gave a toss.

Elsewhere today my family played the board game Scotland Yard. “I won by capturing the crook – aka Dad – on his 20th move.”