…DISASTER!
Yesterday at 7pm a ferry was leaving the Belgian port of Zubrigge [sic].
Just one mile out of the harbour it is thought to have hit something under the water
and capsized on to its side.
It is already being labelled as one of the most terrible sea disasters ever.
All round the harbour every boat was sent to the rescue, including divers in
RAF planes, HMS I’ve forgotten the name, tugs, police, ambulances and all
their services were called and sent.
And the worst thing was that it was at night – see map at bottom.
Witnesses said it all went, people started screaming and then came icy water.
Saturday Superstore started late.
The figures so far: 409 alive, 79 missing, 49 dead.
The prime minister has visited the scene and so have
the Duke and Duchess of York – they all said it was a terrible tragedy…

It was rare for me to include so much reportage in my diaries. I even drew a rather clumsy map:

There’s also this, in one of my school exercise books. I don’t think the intent was 100% respectful: 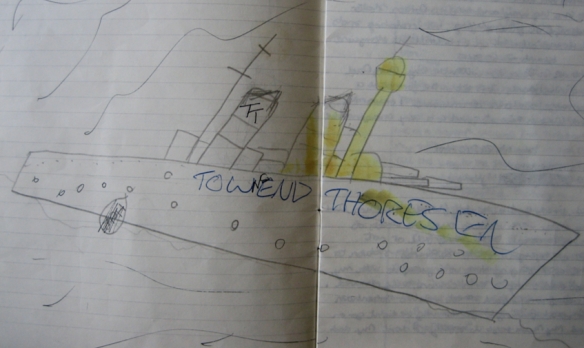 That’s not my writing, by the way. Except the correction. Naturally.