…Just one more week till the end of term.
Had recorders and a practice of the musical evening.
At the event I kept bumping into the flower display.
Me playing the piano was the most funniest [sic] thing that has ever happened in the world.
I played The Entertainer by Scott Joplin…

This is me trying to pull on the twin cloaks of nonchalance and bluster in light of the previous time I treated an audience to my piano-playing.

The event was a musical concert to mark the end of the school year. I’m not sure with which other items I was involved; I’m guessing it was the recorder ensemble. But I was only really bothered by how my solo spot was received.

And it went pretty well. It got a round of applause, which was more than last time.

I’m not sure it entirely made up for the catastrophe that was the school assembly. But it did restore a bit of self-pride and, judging by the “funniest thing” remark, a bit of self-deprecating cockiness.

The Entertainer was my party piece for a while. Then I got a bit more confident and moved on to the theme from Film ’86.

“I was disappointed that BBC chose to transmit Chariots of Fire on a Sunday afternoon. My family and I would very much have liked to watch this powerful and inspiring film about the challenges of faith and spirituality. However as practising Christians we believe we should not watch any television on a Sunday. Consequently we missed the film. Could the BBC please show it again, but not on the Sabbath?”

I’m sure this letter was sent to Radio Times several times during the decade, and usually followed more or less the same format, suggesting it could well have been the same person writing in every time.

As for me, the thing I liked best about Chariots of Fire wasn’t anything to do with faith or spirituality, but the music. I bought the album on cassette from WHSmiths, probably the first soundtrack I ever owned.

I remember being annoyed by the way the penultimate track on side two, a congregation haughtily singing Jerusalem, faded up during the preceding track, a bit of electronic noodling called 100 Metres.

Nowadays I’ m minded to think Jerusalem is a better tune than anything Vangelis has come up with before or since.

Meanwhile, with the World Cup now over, I was able to complete my Radio Times/Grandstand Wallchart, my Ladybird guide, and also this: a pull-out guide from TV Times, which I must have picked up during a visit to my grandparents.

Unfortunately I seem to have made a number of dreadful mistakes, including – erk! – the result of today’s final. Clearly I didn’t pay as much attention to the completion of this document than the, ahem, more classy offerings from Ladybird and the BBC.

A hot air balloon floating above or near our house was always the catalyst for great excitement. The same went for a low-flying helicopter (was it Anneka Rice?) or Concorde, which used to pass our way on one of its occasional visits to East Midlands Airport.

In fact, such was the (justly) perceived significance of a Concorde cameo, its appearances would be announced in the local paper the week before, giving the town’s residents plenty of notice and a chance, if necessary, to re-arrange plans. We all thought Concorde was a big deal. I guess we were easily awed.

…Did silent reading, SMP and a bit of Ginn reading.
Did more on my Union Jack mosaic as well as finishing my puppet in Games time.
No music lesson because piano teacher had a hospital appointment for once…

Hurrah: the puppet was finally finished.

This was not the same puppet that had so spectacularly failed to entertain my peers the previous week.

Rather, this was the mangy marionette I had toiled over in many Art lessons during the past two months, and which I was allowed to take home with me on the last day of term (now only a week or so away).

I didn’t show it to anyone. Raw memories of my brief brush with public puppetry ensured this creation was taken straight into my bedroom and never saw light of day again.

It hung on the back of my door for about six years, before being usurped by my A-level Chemistry lab coat.

I threw it away shortly afterwards, thereby making it one of the few things from my childhood not to stubbornly survive the intervening years in order to be exhumed a clutch of decades later.

For some reason I was more keen on preserving the likes of this, which hails from 1984:

…Had a medical at school. Eeeuuchh…

This was the moment, though I didn’t record it in my diary, that I was informed of something that (cue grown-up Kevin Arnold voiceover) changed my life – utterly.

Medicals at my primary school were held in an unpleasantly musty and forever over-heated room adjacent to the stationery cupboard. To reach it you had to go up a staircase that could only be accessed via the staff room, a domain pupils were normally forbidden from even glimpsing through a crack in the sliding door.

Hence the whole endeavour was already loaded with uneasy, lonely significances, and that was before you even got the the part where you had to strip down to your underwear*.

On this occasion, along with all the usual probing and poking, our hearing and eyesight were also being appraised.

My ears were considered fine, though as it turned out events early the following year would prove traumatically otherwise.

It was my eyesight, however, that prompted the nurse to deliver a piece of news that has informed and influenced my life ever since.

I’d done OK on the reading-letters-off-a-piece-of-card-on-the-far-wall test, even making it to the bottom line. But I’d had real difficulty with some of the identifying-the-numeral-hidden-within-a-pattern-of-coloured-dots tests, and it was this which led the nurse to (a little too triumphantly, I felt) announce that I was colour-blind.

“What?” I think I said, rather pathetically.

I remember crinkling my nose in confusion.

“It means you cannot tell your reds from your greens, dear.”

“You may think you can, but you cannot. And I’m afraid this will have consequences for you in later life.”

“I’m afraid it means that…”

I stared at the nurse, trying not to look too aghast.

“I’m afraid it means that you will never be able to be a fighter pilot.”

I hurried away from that place, believing I had got away lightly.

Ever since then, whenever I have mentioned my colour-blindness to friends or colleagues, the response has almost without exception been: “Does that mean the grass looks red?” 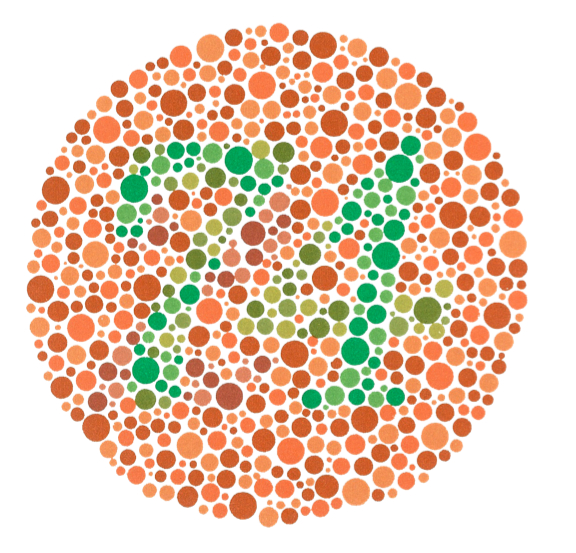 *I can’t imagine this is allowed to take place today. Yet at the time it merely seemed an inconvenience or a bit humiliating, and not suggestive of anything seedy or corrupting.