…More PE, or Physical Exhaustion.
We finally got to go on the gym apparatus, but I got put in a stupid group that could only go on a feeble springboard, a mat, a bench, and THEN ANOTHER MAT!
Dreadful.
In science we had to decide what would make a harmful pet and a normal pet.
What this had to do with science was beyond me.
In Blue Peter they showed you how to make your own personal organiser…

This was one “make” that I thought I’d have a go at. The results were disastrous. It fell apart almost from day one, and had to be held together with Sellotape. I covered the front and back with a garish polkadot design: white spots on a purple background. I then went to the Filofax section WHSmiths and bought a load of maps of places I would never visit in my life.

The whole episode left me so annoyed, and also embarrassed, that I never dared show the wretched thing in public.

I knew then I’d never be a yuppie.

…Another shopping day.
At least this time I bought six books with my various monies, i.e. the £10 book
token and the £4.50 WHSmith voucher.
But of course we had to go to Marks and Spencer which was utterly boring.
We’d gone to Nottingham but it was a trip packed with incident because:
a) we got directed straight past the correct car park where we wanted to go, so
we had to find another car park nearby, much to the displeasure of Dad, and
b) Mum and Dad forgot their chequebook so they had to find a branch of Midland
Bank which was miles away to withdraw some money so they could order some
new furniture from Jessops before it had sold out.
Because of all this we didn’t have lunch until around 3.00pm in a Little Chef off the M1, after which we decided to just come straight home anyway…

Believe me, this did count as a day “packed with incident”. It still would.

A late lunch in a Little Chef? Yes, the 1980s had finally, FINALLY, arrived.

…This day in 1955 must have been exciting to people with TVs because having
advertisements in programmes was just about to start.
Now we all get terribly bored with The Man From Del Monte who keeps on saying
“Yes!” and cat foods and dog foods and pet foods and soon no doubt cow foods…

In other words, today was the anniversary of the birth of ITV: something I would take a bit more seriously many years later, but which for now was just an excuse for some clumsy social commentary on the commercialisation of popular culture. Well, a joke about Del Monte.

But I was right, adverts were more exciting in 1955. What’s not to like about this graph?

And that’s the tooth.

…Went to the open day at Ratcliffe-on-Soar power station.
It wasn’t the case that we could wander around anywhere.
We were given a guided tour, and had to troop in and out of cooling towers,
chimneys and turbine engines.
Well not literally through turbine engines, or we’d be like sausage meat going
through a mincer.
It was very very hot – you could have brought along a sunbed and could have
been in heaven next to the furnace.
The best place was the control room, as it was clean and cool and QUIET…

I remember well the relief at stepping from the noisy, dirty, indecently-hot turbine room into the blissfully peaceful control centre, full of gleaming panels with small lights winking silently. I was particularly smitten with the giant map of the National Grid that covered an entire wall.

This was before the industry got privatised, so the open day was organised by the wonderfully-named Central Electricity Generating Board. I do miss these proudly-titled organisations. They made the country feel reassuringly co-ordinated – to a naive 11-year-old, at least.

Besides, who wouldn’t want to work in a place that looked like this? 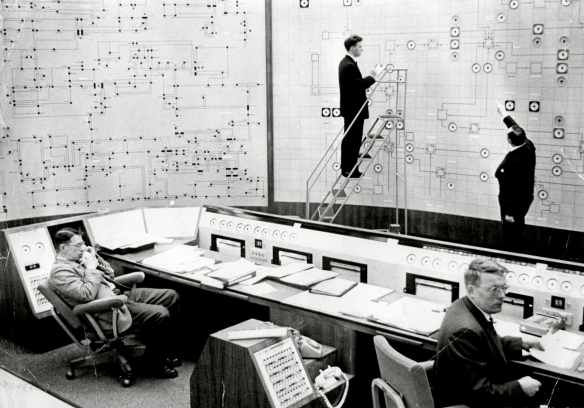 …The car went in for its MOT.
Well of course, money will have to be paid out, it’s a fact of human nature.
Mum took it in this morning then came back here on a Trippit.
The phone rang three times in succession while she was out – turned out to be the
garage wondering where she was.
She bought me a Whizzer and Chips Monthly and also a magazine about the
World Athletics Championships which start tomorrow.
Watched a film called The Fiendish Plot of Dr Fu Manchu starring Peter Sellers
while having a snackette…

“Snackette”? I don’t think the 11-year-old me was consciously using palare… or maybe I was?

A Trippit, however, was not gay slang, but the name of the first bus service to run in Loughborough after deregulation.

This inappropriately-cute title adorned a fleet of glorified minibuses that served half a dozen key routes in and out of the town centre. Another “novelty” was the ability to hail a Trippit anywhere you liked along a designated stretch of road, and not just at a bus stop. This particular feature did not survive for very long – almost as long as the Trippits themselves, who were, inevitably, soon taken over by a larger company, who themselves were then taken over by a larger company, and so on and on until the present arrangement, with most of Loughborough’s buses now owned quite possibly by Angela Merkel.

Still, at least they’re back in the public sector. Shame it’s not the UK’s.